My report of the Grand Prix Cycliste Gatineau !

During the Grand Prix Cycliste Gatineau, the Outaouais welcomes the greatest cyclists in the world. Our cycling ambassador, Frédérick Gates, who had the chance to attend the event, shares his behind-the-scenes experience!

My first mission for Outaouais Tourism was to cover the Grand Prix Cycliste Gatineau (GPCG), which took place May 20 and 21. Here’s my report!! 😊

In my view, it’s a great honour for the Outaouais to host some of the world’s top female cyclists.

The thing is, the GPCG is no ordinary race. Over the years, thanks to this event (which is sanctioned by the Union Cycliste Internationale), our region has welcomed Olympic champions, world champions, and many legendary women cyclists.

The GPCG also provides an opportunity for local athletes to rub shoulders with the sport’s elite, together with family and friends. That’s no small thing!

The fact that the Grand Prix Cycliste is held in the Outaouais directly supports the development of our local athletes and future Olympians. It’s truly something to be proud of.

My first stop was the GPCG site near Lac-des-Fées, where I planned to take a few pictures to post on social media. I was greeted on arrival with a beaming smile and a kiss on both cheeks from Louise Lalonde, the GPCG’s race director.

This amazing woman is well known in the Canadian cycling community. For many years, she has poured her heart and soul into the sport, and she was inducted into the Canadian Cycling Hall of Fame in 2016. It’s always a pleasure to see her.

I’ll never forget our first meeting, at the 2015 Tour de Beauce. It’s a good thing she was there to point me in the right direction!

Summit meeting with the voice of the Grand Prix Cycliste Gatineau

A few minutes later I ran into Randy Fergusson, the voice of the Grand Prix since its very first edition. If you participated in the Tamarack Ottawa Race Weekend last weekend, that was Randy congratulating you as you staggered across the finish line.

I climbed the aluminum ladder and joined him on the announcer’s platform; a few minutes later the peloton swept into view, completing the first circuit. “What the heck,” I said to myself, “might as well turn myself into a reporter while I’m at it.”

Randy was fine with that, and gladly answered a few questions for my Facebook Live. It was all very spontaneous, and I filmed the whole thing on my cellphone. Those of you who know me will know that I tend to wave my arms around a lot when I talk—so talking, filming and improvising all at the same time was pushing it. But hey! I had a blast doing it. 😃 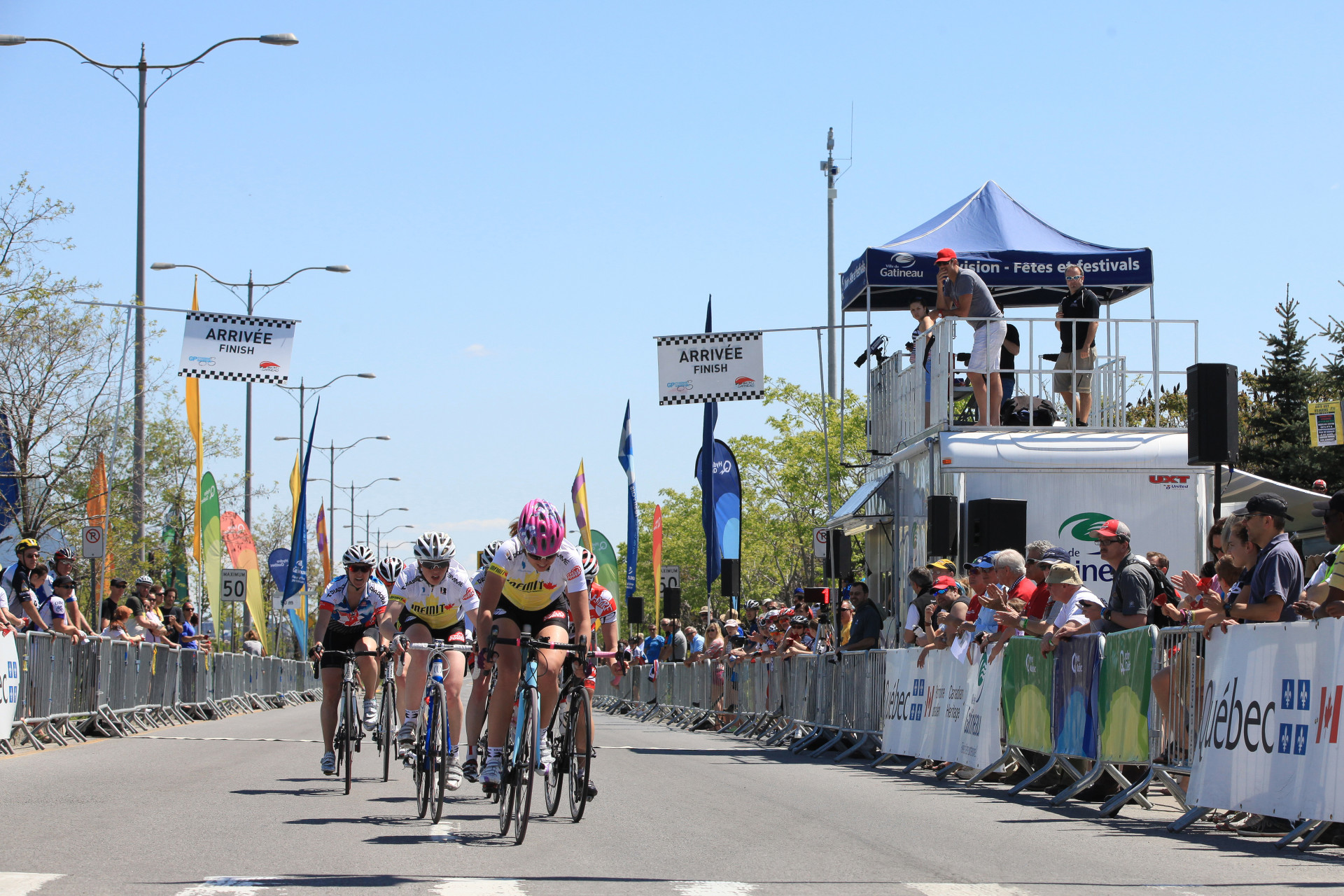 A challenge for all ages and ability levels

While the Grand Prix Cycliste Gatineau is reserved for professional athletes, the Gran Fondo offers a personal challenge for amateur athletes willing to tackle the 111.8-km course. (There’s also a 69‑km option.)

The GPCG organizers had invited my team to participate. Since there are no longer any elite races for men, the Gran Fondo is the only chance to give the team’s local sponsors any visibility.

This event invites cyclists of all ages and ability levels to challenge themselves in a structured, supportive setting. To give you an idea, nearly two hours elapsed between the times the first and last cyclists crossed the finish line.

The best part? Everyone gets to enjoy a hearty meal of pasta, and a chance to swap stories over a cold beer inside the tent.

That’s where I met Vito, a talented Italian-born businessman from the Toronto area. Though he was in his fifties, after cycling more than 110 km he still had energy to spare.

He and a dozen members of his cycling club had travelled to the Outaouais a few days earlier to participate in the Gran Fondo. Vito was really impressed by the organization of the event and the beauty of the surroundings.

We had some great chats. I learned that he was friends with former Italian sprint cycling superstar Mario Cipollini—one of my childhood idols!! 😃 Vito was happy to share a few tales of his travels with “Cipo.”

That’s the great thing about cycling: regardless of your age, background or personal goals, there are no psychological or social barriers when it comes to getting together with other passionate people dressed in Spandex and riding two-wheelers!

One thing for sure, Vito and his group will be back in the Outaouais next year to enjoy the cycling paradise our magnificent region has to offer!

Hello, everyone! Here I am writing my first official blog post for Outaouais Tourism. In this blog, I’ll cover not only cycling events taking place in the region, but also my personal favourites and top cycling routes. Most of all, dear readers, I want to share my love of cycling!